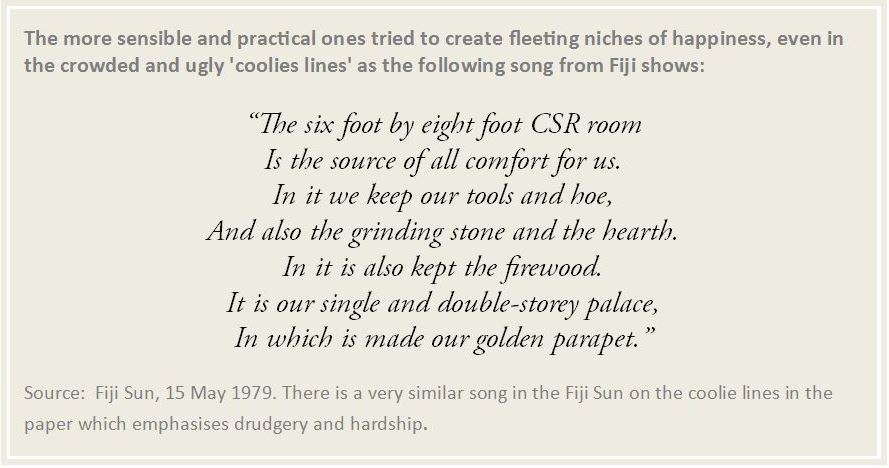 Pancham
I had no intention of coming to Fiji, or going away to any other island. It was the season of cheat, a time of extreme heat, and the time …[more]

Din Mohammed
I came from Basti in the year 1910. I deliberately left my mother and father and ran away and came to Fiji, I was lured away by …[more]

Mahadeo
I was sixteen when I came to Fiji. I was unmarried and an orphan; my parents had died in some epidemic. In India I had made a living …[more]

Govind Singh
I came on Chenab I, from Babalpur and was 19 or 20 years old when I arrived in Fiji. Two or three of us were wandering around the …[more]

Rahim Buksh
I was young and working on the railroad in India. One day I went out to do some shopping and I met a Muslim recruiter who gave me some …[more]

Lotan
I came from Basti when I was 28 years old. I left India because there was a shortage of work there, so four of us got together and decided …[more]

Debi Singh
I lived with my wife and mother in India. One day I decided to visit my aunt in Basvelli. My mother gave me some money to buy some …[more]

Mahabir
I was about 16 and used to work as a lohar. Then I met a man who asked me whether I was looking for a job. When I answered that I was, …[more]

Lakhpat
I came to Fiji in the year 1911. I was born in Kanpur, Madhya Pradesh, but my parents came from Varanasi in Uttar Pradesh. I was about 15 ..[more]

Gafur
I was a student in Bombay and was on my way home when I met some men who asked me if I were interested in work. They took me …[more]

Pahalad
I was on a journey to Kanpur to work on the Ganges and met an arkati who took me in a buggy to a recruiting depot. At that time I was …[more]

Bujawan
My original home was Gonda in India. I was lured by recruiters when I was about twenty-five years of age. I could read a little in those …[more]

Samjhawan
I arrived in Fiji in 1910. With others we were sent to Lautoka which we reached on a night when hurricane winds were raging. Our first …[more]

Devi Singh
I was working in Calcutta and remitting money to my village in Agra. In Calcutta I was a watchman earning 4/- per week. I had been …[more]

Chinsan
I came to Fiji through my own arrogance. There was trouble at home and I walked out. I met someone and asked him to give me work. He …[more]

Jagan
I left because of a problem with my marriage. My wife was 12 years old. Whenever I approached her she resisted my advances. Hence, I …[more]

Gayadin
I had a quarrel with my brothers and so left home. I had been in Surinam before coming to Fiji. I worked in Surinam for about six years and …[more]

Mangaia
I came with another man as his brother. We quietly fled from our homes. My brothers gave me a rough time so I wanted to leave India. I …[more]

Ramraj Maharaj
I was a sturdy 16 year-old on my way to the town where there was a recruiting depot, and met an arkati who suggested there was …[more]

Kanan
I am from Malabar. I am not a Hindustani. I served my indenture in Fiji in Navua. It is difficult for me to relate why I came. Everyone who …[more]

Hussein
I was an assistant teacher at a school and I hit a girl who I was to marry in a week’s time. We had already bought all the provisions for the …[more]

Bhagelu
I left India because it was a time of distress in the country. There was therefore a willingness on my part to accept the offer of a job. I …[more]