Home » The Day The “Leonidas” Arrived – A Fiji Times Article

The Day The “Leonidas” Arrived – A Fiji Times Article

The “Fiji Times” was there to record this historic occasion. Following is an extract from their paper dated May 17, 1879

The ship Leonidas, Captain McLachlan, which sailed from Calcutta on March 3rd, arrived at the port on the afternoon of Wednesday 14th, but failed to make the harbour that evening.

On the next morning communication was had with the ship, and the unfortunate vessel was found to be in a pest-stricken condition.

Eventually, after the ship had sailed for some time up and down outside the port, she was piloted in by means of the pilot boat. 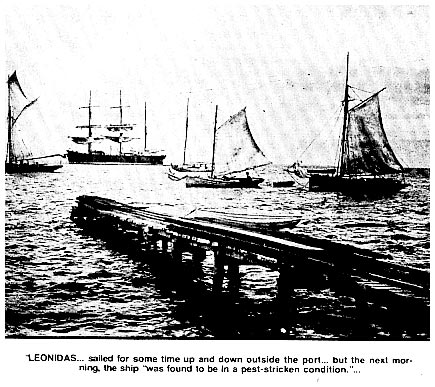 The Leonidas passed up the harbour, passed Vagadaci, and when off Waitovu through some stupidity touched the reef, but with the riding tide floated off and dropped anchor in Waitovu passage, or as far away from the shore as she could be conveniently anchored without touching the outer reef.

So soon as communication was made with the ship, it was ascertained that cholera had been on board together with smallpox, and that II coolies had died of cholera arid six of dysentery; cholera seeming to predominate, while little seems to be known of smallpox.

Every precaution, under the unfortunate circumstances of the case, appears to have been adopted by the Government.

A cordon of four police boats has been arranged at suitable distances round the Leonidas, and the schooner Elizabeth (lately the Samoan navy) has been sailed down from Nasova and anchored off Waitovu, as relieving, or guard ship, that the boats’ crews may be relieved every four hours.

Dr McGregor (the Chief Medical Officer of the Colony) has devised a very ingenious method of effectually preventing the contagion being conveyed to the shore, during the process of sending stores, letters, etc, to the ship. A staging has been erected on the outer reef, with a moving platform. Stores necessary to the ship are placed on this platform at low tide and taken off by the ship s boat.

The whole staging is then demolished and allowed to float until the next low tide; when it is re-erected.

All letters are placed in a carbolic acid bottle, and are of course fumigated before delivery. Communication with the vessel under these circumstances is of course slow, but from what we learn there are 373 male and 149 female coolies on board, independent of children, all of whom are under the charge of Doctor Welsh. We hear also that two buffaloes are on board.

It is sincerely to be hoped that all officers of the Government will, under the trying and unfortunate circumstances, be at their post and duty, and that any and every assistance will be rendered by one and all to prevent any contagion reaching these shores.